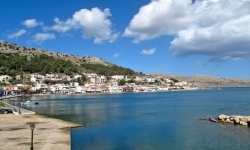 TOURS TO NORTH AND NORTHEAST CHIOS

Today’s day is dedicated to the north part of the Island, with the exceptional beauty of Amani, the dense vegetation and the spring waters, the castle villages and the beautiful beaches of west Chios. Following the central road of Chora – Volissos and ascending the plateau of Aepos with the panoramic view towards the town and the coast of Minor Asia, we arrive at the picturesque village of Katavasi. Here lived as a hermit   the saint Matrona Hiliopolitida. We stop for coffee at the beautiful café of the village, under the plain and fir trees, with spring waters around us and a really magical natural scenery.

Afterwards we depart for the Holy Monastery of Agia Markella, patron of Chios. We pray and pay our respects and if you want you can visit the place, where the saint died as a martyr in 1.500 a.C. at the edge of the beach. To this spot today  is welling spring water, known as holly water (agiasma).

Our next stop is Volissos, the head village of northwest Chios. It is a place with great history since the ancient times, that has preserved its traditional architecture. The village impress the visitor from the first glimpse, with its impressive castle that dominates the scenery and dates from the byzantine period.

We take a tour on the pebble paved alleys, where you can see restored stone houses with the flat ceramic roofs. There is free time to spent as you wish for a lunch. Ulternative, during the summer months we can take our lunch in one of the tavernas by the sea in one the coastal villages ( Magemena, Lefkathia, Limnos, and Limnia) on the road that connects Volissos with the Monastery of Agia Markella.

After wards we depart for Pytios, one of the most important villages of north Chios with medieval character, built as the villages on the south of Chios. We take a walk to the picturesque alleys, that are ending to the dominant two level tower with the irregular shape which standing on the cliff.

We continue for Kardamila, the ancient Kardamili as it is mentioned by Thucydides. This village is the birth place of many ship owners of Greece, and a great number of its population are captains, seamen and sailors. Kardamila are devided in to two big villages : the Pano Horio and the Marmaro. The village’s symbol is the Kardamiliti Sailor (from Kardamili) statue, that decorates the picturesque port at Marmaro, where we will have our free time to spent in our desire.

Our last stop is Lagada, which is build in a wide and fertile valley that stretches to the sea. It is a traditional fishing village and a place of a nautical importance, with a very picturesque coast, where along side are lined traditional tavernas offering fresh fish and sea food, tasty mezedes and local cuisine. We have free time to spent as we desire and later we return to the town of Chios.