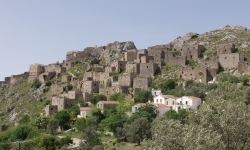 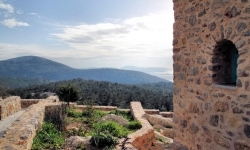 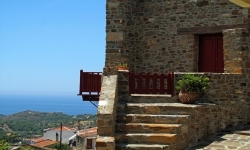 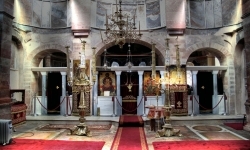 We start from the town of Chios towards west, in order to pay a visit on some of the most distinguished examples of byzantine, medieval and monastic architecture on the Island. Following a mountainous route through a dense pine tree vegetation, with panoramic views to the town, the valley and the coasts of Minor Asia, we arrive to the calm and beautiful west coast with wonderful sunset and the picturesque beaches.

Our first stop is Nea Moni, the most important byzantine monument that is under the protective umbrella of UNESCO. It was founded in the 11th century and was distinguished amongst others, because of the art that was build and decorated, as well as its direct relationship with Constantinople and the emperor’s influence. According the monastic tales, the emperor Constantine the Gladiator has financed the building of the monastery, after the finding of the Holy Icon of Panagia, by three Chios monks Nikitas, Ioannis and Josef, under a myrtle tree where the monastery is standing now.

For many centuries was a religious and financial center of Chios, while its decline started in the 19th century, with finance difficulties at first and then with the catastrophe of 1822 . The mosaics of Nea Moni are amongst the most important examples of the Byzantine art, thanks to their exceptional quality and the facts that are projects by artists that were coming from the best workshops of Constantinople.

Next stop is the medieval village of Anavatos, known as well as the “Mistras of the Aegean”. The whole village is “climped” up on top of a hill, at the edge of the cliff. Its natural fortification states that was build in order to be a look out for pirates, as well as to be protected and defended.  A walk around the village  /fortress , with its stone build houses that today are deserted, gives us the image of a dead city, and it has being declared  preservable settlement.

After we vist the well preserved medieval settlement of Avgonyma, with its tall stone houses, the narrow alleys and the magnificent view towards the Aegean Sea. We have free time for lunch to one of the traditional tavernas and restaurants.

It is worth to continue the route and head down and west to the coastal road with the wonderful coast line and go to Lithio beach, a big sandy beach that is spread out in front to the beautiful bay. Here you can enjoy the freshness of crystal clear water and a magical sunset, and a dinner to one of the restaurants by the sea (instead the lunch at Avgonyma village). In the afternoon we return to the center of Chios.