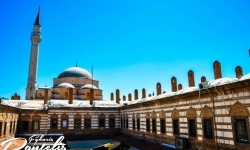 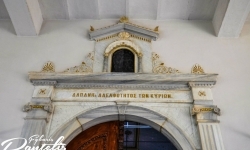 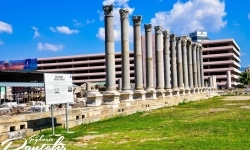 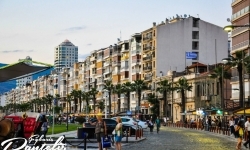 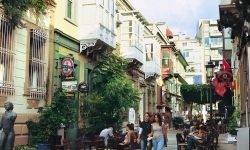 Arrival to Cesme harbor after 35 minutes and direct boarding on the coaches with destination the city of Smirni, the third largest city in Turkey, where for centuries was the heart of minor Asia Hellenism..

Passing from Alatsata, a purely Greek Orthodox village before 1922, that is still preserving its traditional Aegean architecture and Vourla, an important cradle of Hellenism in Asia Minor, we arriving in Smirni after about an hour.

Touring around the most important suburbs and sites. Staring from Kokatyiali, karandina (Enopi), and Karatasi, we arrive at the Kognac square,  where is the Clock, the towns’ symbol and  the governors’ house with its Ionian architecture elements on its façade, and where the archbishop Chrysostomos had a martyr’s death.

Afterwards we pass in front of the Casabas rail station (19th century), the Greek Central Girls School of classic architecture style, and the once named Hatzifragou Street, on the hospitals’ area.

We continue to the English railway of Aidini, Pounta with the few Levantin houses that are still preserved and the Fragomahala (French neighborhood), the most important and biggest French suburb in Anatolia, that was the residence of wealthy Europeans and Greeks.

On the narrow streets are still standing houses of the 19th century mainly, with the distinguishing classic architecture style, giving us a glimpse on how the town looked before the catastrophe.

As we cross the coast of Keh, we see the house of Kapetanakis standing out, an impressive neoclassic building, that is housing again after 15 years the Greek Embassy. While we walk towards Bella Vista, we pass in front of the classic  building of the National Bank, with the old customs office (a project by Eifel).

Afterwards, an optional visit to the ancient market of Smirni and touring at the archeological site, where was recently discovered a big collection of Greek wall frescoes (the richest internationally) of the everyday life on the Roman period.

Our next stop is Agios Voukolos, the only orthodox church that was saved from the 1922 catastrophe, which is dedicated on the first archbishop of Smirni Voukolos.

The church has being recently restored and is a testimony to the old glorious but also tragic days of the older days of Hellenism in Smyrni.

Then, free time in the bustling bazaar of Smyrna, Kemeralti. Here is the old Ottoman neighborhood of the city with winding alleys, old Ottoman houses and a restored 18th-century mansion. In the late afternoon, gathering and returning to the port of Cesme. Boarding and departing to Chios.

Optional tour of Agios Voukolos and the Ancient Agora

Port tax of 2 € per person (regardless of age) of the Cesme private harbor, which you pay at the check in of Cesme port.