TOURS OF CHIOS TOWN AND THE SUBURBS ID: TOUR-CH001 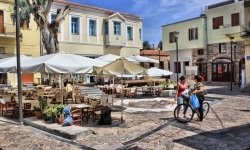 TOURS OF CHIOS TOWN AND THE SUBURBS

Tour in few of the most important sites of Chora (as it’s called in most Islands the main town) and its suburbs.

Our day starts from Kampos of Chios, an idyllic area covered by orange and citrus orchards, unique in the Aegean Sea. At Kampos you can have a glimpse of the glorious past of Chios, as it was described by foreign travelers of 16th and 17th century.

Here you can see mansions and houses that belonged to Genovese lords, byzantine lords and officers and wealthy traders of Chios, in a period of 5 centuries until 18822. Amongst the orchards with the wonderful scent of citrus trees, are popping up magnificent houses with tall wals 0 from the local Thymianousi red stone, pubble paved yards and wells . In the area are 38 byzantine churches and 64 maansion houses, that are listed as preservable by the Greek Ministry of Culture.

We pay a visit  to the Citrus museum, that focuses to the authentic history of Chios through the centuries, as a place with great tradition and expertise on the citrus production, as well as other products that were prosperous in Kampos, and were traded through the then known world.

The museum is housed in a mansion of 1742 and the visitor has the chance by walking around,  to get informed about the rich past and the creative present, as well as the future of the citrus production and trading of Kampos.

Our next stop is Kastro, which is build next to the port and as it is still inhabited is a live part of the town, even to our days. It is dated from the 10th century with plenty alterations by the Genovese, and Turkish rulers, and during the centuries played a big part in the Chios history, during the medieval, later and the most recent period.

During the touring at the picturesque narrow streets, we can visit the renovated Palataki Ioustiniani (Justinian palace), the Genovese government manor, that today is housing museum with relics from byzantine churches, early Christian mosaics and byzantine wall frescoes. Afterwards we visit the church of Agios Georgios (Saint George) which at the first was byzantine, then turned to Romeo catholic and in turn to mosque, (according the changing of occupations).

Today are kept here important relics such as religious artifacts, covers, icons, books and many more, where most of these were brought by minor Asia refugees from the 1914’s persecution as well as from 1922’s. We continue to the central road and we arrive at the ottoman baths (1700 a.C), with the spherical domes, that were recently renovated.

Afterwards we return to the central square of the castle and we have free time for coffe in one of the traditional cafes.

Afterwards we take a walk to Aplotaria, the historical high street of Chios, with the shops and services, and we arrive at the Korais Library one of the biggest and most impressive in Greece. Here is housed by the  Argenti National and Folclore Museum a big collection with wonderful and authentic samples by local costumes, embroidery and weaved artifacts, wall frescoes, wooden crafted utensils, as well as historic paintings by the Argenti family’s  private collection.

Afterwards we depart by coach to Vrontado, a favorite destination for recreation and relaxing leisure, amongst the locals as well as the visitors. Here we will visit Daskalopetra. On a small hill with sea view, is found a big bolder that was connected  by few, with Homer and by others was considered to be the altar of an idolatrous god, as archeologists can recognize characteristics of a monolithic statue – temple of Kyveli (Cybele) goddess, that was worshiped as the great mother in the ancient period of Chios. According the myth and the local tales, is the place where Homer was teaching his epic writings, giving to the greater area the name of Daskalopetra (Teacher’s Stone) or Homer’s Stone.

Return to the town of Chios