For the residents and the visitors of Chios, the sea passage of just 8 nautical miles to the Turkish coast is the opportunity for one to stop watching the Turkish coast from afar and having nostalgia of old lands and civilizations, and actually visit the land that was for centuries the place of Ionian culture, Christianity and Greek civilization.

It is the land of Ionia, Aeolia, Lydia, Caria and Lycea, the land of Constantinipole, Kapadokia and Pontos, where the Greek civilization met East, placing the foundations of philosophy and science, while also considered the cradle of cultures. With organized excursions by our travel agency, you can visit the monuments and remains of these civilizations that flourished from the ancient years to Byzantium and to the 19th and beginning of the 20th century.

It is a trip down memory lane as well as a way to discover the Turkey of today, in locations with customs that are close to Greek visitors. The westernized character of the coastal minor Asia, the rich and impressive sites, the variant natural scenery, the variety of comfortable accommodation as well as the friendly way and hospitality of the locals will surprise you in a most pleasant way.

Beginning from the area of Erithrea with Tsesme, Kato Panagia, Alatsata and Vourla, we arrive at the cosmopolitan Smyrni which for centuries was the heartbeat of the Asia Minor Hellenism, with its famous market and the monuments showcasing the history and past. You can also visit Kordelio, Boutzas and Bournova, well known suburbs from the past as well as the songs that they were mentioned in.

Continuing towards the south, we meet important archeological sites such as Ephesus with the basilica church of Agios Ioannis Theologos, Preini, Militos and the impressive Didima. At the same time we have the famous tourist resorts such as Kousadasi, Alikarnassos (Bondrum) and Marmaris. More southwards between the Taurus mountain and the Mediterranean coast we meet ancient cities and picturesque villages such as Makri (Fethiye) with the Lycean graves, the traditional Kas (Antifelos) and the subwater city of Kekovas, Myra with the church of Agios Nikolaos, as well as Atallia the most modern and westernized Turkish city and capital of tourism in Turkey.

Atallia with the great mansions, distinguished by the Mediterranean architecture and monuments from all periods of history, is an ideal base for accommodation so that you will be able to visit Pergi, Aspendo and Sili, the three ancient cities of Pamphyllia with the great monuments that are well preserved. 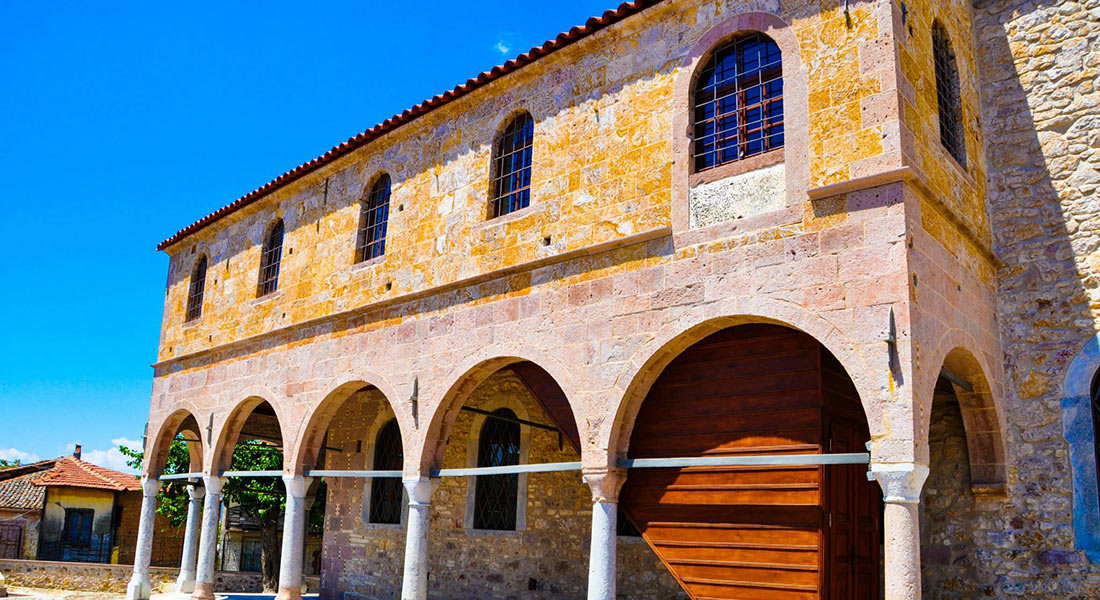 North of the city of Smyrni on our route to the “Aeolian land” of Helias Venizis, we meet Menemeni which was an important Greek community before 1922, the picturesque Fokea that once upon a time used to be the city of the seafarers, pergamos with the Asclepeion and the Red Vasilica. The next stop is Aivali that has kept its traditional colours and characteristics with the grandeur churches, impressive mansions and the estates which although are in decline, still remind us the prosperus days of the Minor Asia Hellenism.

Continuing along the coast in accordance with coast of Lesvos the Adramytino Gulf, through prosperous olive groves and dense pine forests, we arrive at ancient Assos, the famous Troy and the narrow passages of Ellispontos, that were not only a mythical and historical passage, but indicated the transition from Europe to Asia and from the Aegean Sea to the Marmaras Sea. Visits to this area can be combined with a trip to the islands of Imvros and Tenedos. 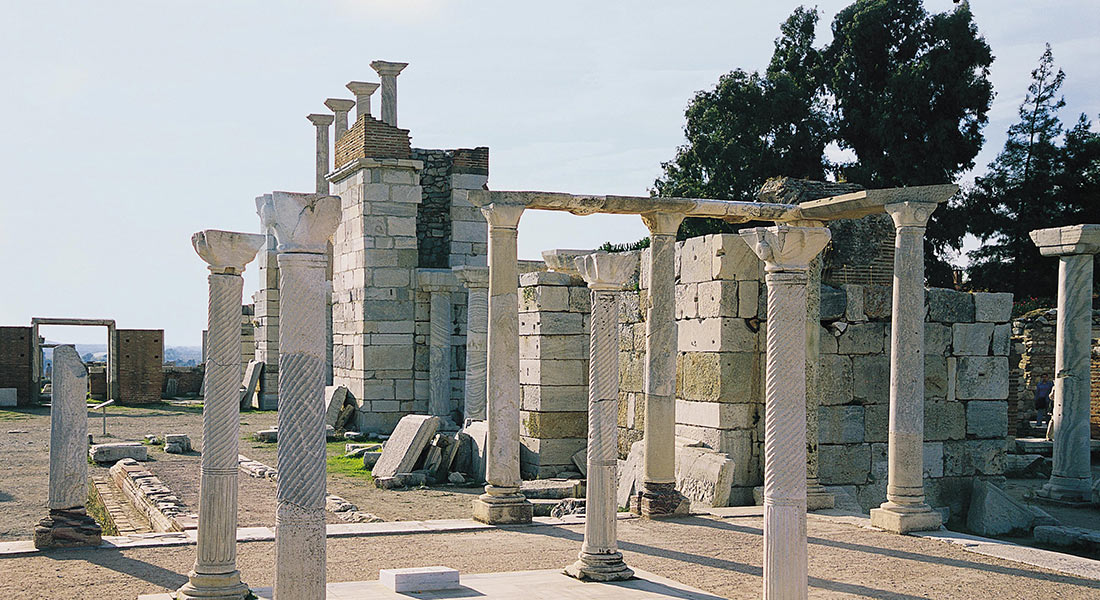 At the southern waters of the Marmaras Sea, we meet important cities that had strong Greek populations until 1922 and the exchange of population, such as Artaki and Kyzikos, two of the ancient colonies of Militos. Continuing towards the east we arrive at Triglea, the homeland of the Smyrni Archibishop Chrysostomos, with the Zarifea educational premises and the church of Panagia Pantovasilissa, as well as Sigi and Moudania, beloved resorts of the Greek middle class of Proussa and Constantinople with the exceptionally beautiful wooden coastal houses. Prousa is built on the green slopes of mount Olympos of the ancient Vithynea and the rich vegetation, monuments, silk products and exceptional cuisine will all take you by surprise.

At the north coast of the Marmaras Sea, where the Vosporus Gulf meets the Ceratios Gulf and the Marmara Sea, which is the meeting point of Europe and Asia, stands the impressive and famous Constantinopole. A vibrant and multidimensional city with great history, where the traditional elements are in contrast with the European character of a great city. The impressive religious and historical monuments that stand are unmistakable witnesses of the long history over the centuries.

It is the land of the Orthodox Ecumenical Patriarchate, Hagia Sophia, Panagia Vlaherna, the Tower of Galatas, impressive palaces on the coast of Vosporus, the famous community of Stavrodromi (Pera) with the great high street of Pera and the Zografio educational institute, Chalkidona and many churches and mosques of historical importance. For visitors to Constantinople the picture won’t be complete if the visit doesn't include a cruise along the Vosporus coast and Prigipos islands, whose highlights include the island of Halki with the Theological university. 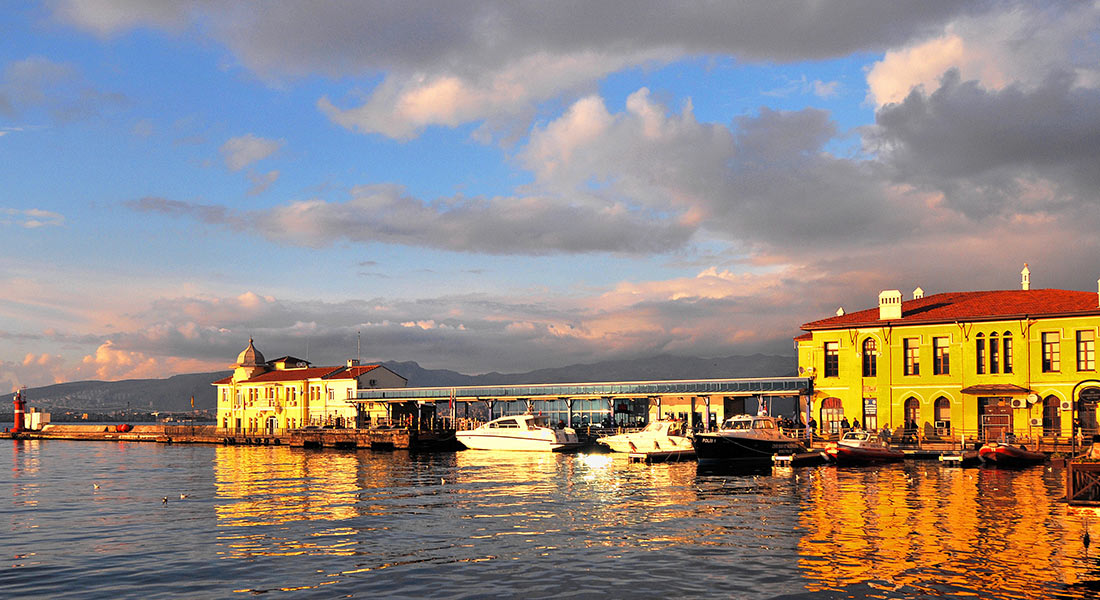 East from Smyrni on the road towards Anatolia, we meet great and important ancient cities that are still standing today. These are Sardees the capital of ancient Lydea, Philadeplhia and Laodicea, two of the seven churches of Apocalipsis, the Iearpolis with the hot spas and the thermal water with the calcium salts, the Aphrodiasiada and many more smaller cities scattered in the valley of Meandros and Hermos rivers, or which have climbed up on the slopes of mount Tmolos. Continuing towards central Minor Asia, we arrive at the so called Anatolia, where conflict and the meeting of civilizations, religions and empires, left many historical, religious and cultural monuments.

Here Cappadocia dominates the area, an open air museum of International heritage. Cappadocia is the land with the underground cities and the many monastic complexes and churches, most of them carved in the rocks. It was the land of Orthodox Christianity and the place where the Three Great Hierarchs of Christianity taught and worked.

Amongst the underground cities, the one that stands out is the Malakopi, the open air museum Korama (a monastic complex with the densest build of churches and cave dwellings), Peristrema (an area covered by canyons and gorges of exceptional wild natural beauty, monastic complexes and churches of the proto Christian era carved on the rocks), Karvali with the church of Agios Grigorios, Sinassos which was considered to be the “Athens” of the East because of the beauty, and clearness of the Greek language that was spoken by its citizens. Other places include Avanos, Zelvi, Nigdi, Cessaria and Ikonion with Silli, a Greek town that stood out for its Byzantine character, the churches and monasteries, as well as the peculiar Greek language that was spoken by the people here, which was not the same as any other Greek speaking town and city.

Smyrni can be the starting point for a trip to Pontos, as it is connected with direct flights with Sampsounta and Trapezounta. A trip to the area of Pontos is amongst other things, a pilgrimage to Pontos Hellenism and Christianity and it is a way to keep alive the memory to the old traditions and ways, which continued no matter the difficult and harsh conditions, from the 8th century when the Greek colonies were founded on the coast of the Black Sea, until the persecutions and the killings that were concluded in the disastrous campaign of 1922.

In every excursion, the core of the tours is the monastery of Panagia Soumela in the Matsouka province, the holiest pilgrimage on the Pontos Land, which was the beacon and the light of Orthodoxy and Hellenism. Trapezounta was the land of “Myrioi of Xenophon” as well as the Great Comninos family of Byzantine emperors, with Frontistirion (one of the most important schools of Pontos), Hagia Sophia and many churches and mansion houses that are still standing dominant and graceful.

Continuing towards the west, we meet important and historical cities of Pontos such as Kerasounta with the Greek district and the church of Agios Nikolaos (which today is a museum), Kotyora with Psomiadeios School and the church of Hypapandi, Sampsounta (an important and the 2nd largest city and port of Pontos) with the church of Agia Triada and the impressive mansion houses that are still preserved in the Greek district that was once thriving and prospering, Sinopi (well known from the Argonaut expedition) and the picturesque Amasea on the banks of the river Iris. In the area of the west Pontos, we see Paflagonia, the traditional Safranpoli (a Hunesco heritage) and Kastamoni, birthplace of Byzantine emperors, two more cities that have a lot to show to modern visitors and travellers from the glamour of their old days.

An excursion to the coast of Minor Asia can be the starting point to the islands of the East Aegean Sea, thanks to the continuous and timely direct boat connections between the Turkish coastal towns and these islands. Therefore Cousadasi can be easily combined with an excursion to Samos, Bodrum (Alikarnassos) with Leros, Kalymnos and Kos, Marmaris with Symi and Rhodes and Kas with Kastelorizo.