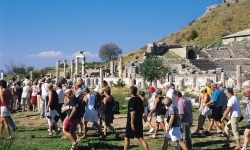 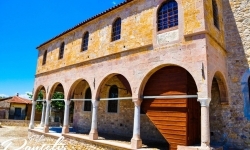 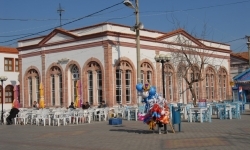 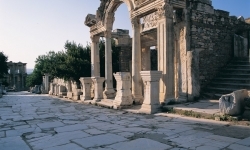 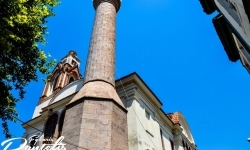 We are gathering at the customs office of Chios at 07:30 p.m. Passport check (or the new type Greek ID card), registering on the passengers lists (check–in) and boarding on the ferry Ε/Γ -Τ/Ρ «SAN NICOLAS, on which we will depart towards Cesme at 08.15.

We arrive at Cesme port after 35 minutes sailing, and we are boarding straight away on coaches to Smirni, with destination the third biggest city of Turkey, where for centuries was the heart of minor Asia Hellenism.

Passing from Alatsata, a purely Greek Orthodox village before 1922, that is still preserving its traditional Aegean architecture and Vourla, an important cradle of Hellenism in Asia Minor, we arriving in Smirni after about an hour.

Touring around the most important suburbs and sites. Staring from Kokatyiali, karandina (Enopi), and Karatasi, we arrive at the Kognac square,  where is the Clock, the towns’ symbol and  the governors’ house with its Ionian architecture elements on its façade, and where the archbishop Chrysostomos had a martyr’s death.

Afterwards we pass in front of the Casabas rail station (19th century), the Greek Central Girls School of classic architecture style, and the once named Hatzifragou Street, on the hospitals’ area.

We continue to the English railway of Aidini, Pounta with the few Levantin houses that are still preserved and the Fragomahala (French neighborhood), the most important and biggest French suburb in Anatolia, that was the residence of wealthy Europeans and Greeks.

On the narrow streets are still standing houses of the 19th century mainly, with the distinguishing classic architecture style, giving us a glimpse on how the town looked before the catastrophe.

As we cross the coast of Keh, we see the house of Kapetanakis standing out, an impressive neoclassic building, that is housing again after 15 years the Greek Embassy. While we walk towards Bella Vista, we pass in front of the classic  building of the National Bank, with the old customs office (a project by Eifel).

Afterwards, we visit the ancient market of Smirni and touring at the archeological site, where was recently discovered a big collection of Greek wall frescoes (the richest internationally) of the everyday life on the Roman period.

Our next stop is Agios Voukolos, the only orthodox church that was saved from the 1922 catastrophe, which is dedicated on the first archbishop of Smirni Voukolos.

The church has being recently restored and is a testimony to the old glorious but also tragic days of the older days of Hellenism in Smyrni.

Afterwards we are heading for rest to a 4* hotel in the center of city.

The afternoon is free so you can visit the busy flea market of Smirni, the Kemeralti, where is located the old ottoman neighborhood with the narrow alleys, old ottoman style houses and a restored inn from the 18th century.

It is worth to take a stroll to the picturesque alleys of Alsancak and drink a coffee or a drink in one of the many cafes and restaurants that are located on the Smirni coast. A large area from Alsancak up to the old customs office, today has being transformed to a modern mall – konak pier, and is ideal for a beautiful walk. Return to hotel for dinner and rest.

After our breakfast at the hotel, we depart for Pergamos where we arrive after 1 and a half aprox.

Our first stop is the famous Red Vasilica or Serapio, originally was an Egyptian temple of the 2nd b.C century that was turned to a church dedicated to Agios Antypas in the 4th century a.C.  Here was the place that many people died of a martyred death because they refused to worship the emperor as God.

Later the temple was dedicated to Agios Ioannis Theologos, as Pergamos was one of the seven churches of Apocalypses. Our next stop is the Pergamos Asclepieion, one of the first therapeutic places in the Ancient times, dedicated to Asclepius the god of health.  The Asclepion of Pergamos was well known all over East, and was very popular during the Hellenistic and Roman times.

Indeed, for some time he was the chief physician of the Roman era, Galenus.

During our tour we will see the sacred way (Iera Odo), the Propylaea, the health centers, the temple of Asclepius and the ancient theater.

Then we depart for Aivali. We have free time for lunch and touring to the old town, that still preserves intact its traditional character with grandiose churches and mansions, which although are declining are still remind us the days of the prosperity and peak of the minor Asia Hellenism.

We pay a visit to the largest and most impressive churches that were converted to mosques after 1923.

Starting from the building that before 1922 was housing the Greek Hospital, we arrive to the historical church of Panagia of the orphanages, and continuing towards the upper neighborhood we meet the ruins of the Agia Triada (Holy Trinity) church, where opposite this is the house of the great Greek writer Helias Venezis.

Our next stop is the impressive and grand church that was dedicated to Agios Georgios  Chiopoliti (Saint George from Chios), that today is operating as mosque, still preserving all the classic decorative elements of the 19th century.

Then we continue our tour to the narrow alleys, meeting the house that was lived the great hagiographer and literature Fotis Kontoglou, as well as the church of Agios Ioannis (saint John), that dominates in the center of Aivali (today as a mosque). One of its two belfries has been preserved but the other has been turned to minaret.

It is worth to continue little bit further more to the uphill alleys that lead to the oldest neighborhood of Aivali with the traditional houses, that are still preserving the authentic architecture style of the time, with the eastern hayiatis (Ceiling on one side of the wall and the other side is attached to wooden columns) and the neoclassic elements and also visit the recently renovated church of Taxiarhis, that today is operating as a museum. Afterwards we depart for Moshonisi, where we will pay a visit to the recently renovated cathedral of Taxiarhes, that today is operating as a museum.

There is free time for a stroll to the old town with the well preserved Greek houses. In the afternoon we return to Smirni.

Dinner and overnight stay at the hotel.

After breakfast at the hotel, we depart for Ephesus, the city that for more than a 1000 years was one of the biggest cities of the ancient world and one of the seven churches of Apocalypse. It is indeed, for the most well preserved and busy archeological site of Turkey. We are touring to the ancient city that was founded around in the 10th century b.C as Ionian colony.

But the main monuments that survive today, refer to the Hellenistic, Roman and early Christian period.

Amongst them are standing out the Vouleftirio (parliament), the Temple of Hadrian, the temple of Diomitean, the street of Kourites, the library of Celsus, the baths, the Agoras, and the theater, one of the biggest of the ancient world (24.000 viewers).

Then,  passing with the bus from the point where are laid the remains of the temple of Artemis, one of the seven wonders of the antic world, we arrive at Selcuk, (Old Ephesus) to pay a visit to the Basilica of Saint John the Evangelist (Agios Ioannis Theologos).

According to the tradition, the Saint has lived way from the people, on the top of the castle and he wrote the gospels.

This place was from the early years,  a sacred place of pilgrimage, as it was the place where was died and buried Jesus’ favorite apostle.

At first there was build a church by Constantine the Great, that was replaced in the 6th century by the emperor Justinian with a magnificent Basilica, remains of which, are still saved up today.

Afterwards we depart for the cosmopolitan Kousadasi. There is free time and in the afternoon we depart for the Cesme port, where we arrive there after 2 hrs of driving. We embark on the ferry and depart fro Chios on 19:00 .

What is included in the price:

Are not included in the price :

Attention : In order to participate to the excursion is nececary to have valid passport or a new style Greek ID card.