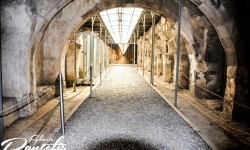 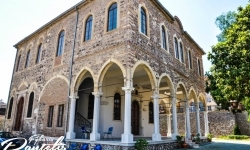 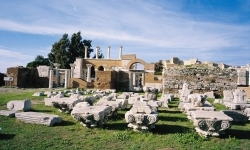 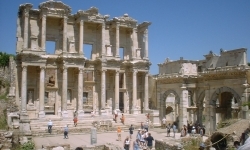 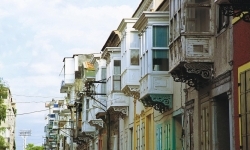 Gathering at Chios customs office at 7:30 a.m. Check passports (or new type Greek identities), registering on the passengers lists and board in to the ferry

Arrival at the port of Cesme after 35 minutes and immediate boarding a bus bound for the city of Izmir, the third largest city in Turkey, where tens of centuries was the heart of Asia Minor Hellenism.

Passing Alatsata, a purely Greek Orthodox village before 1922, which still preserves even today the traditional Aegean architecture. There is also Vourla, an important cradle of Asia Minor Hellenism arriving in Izmir after about 1 hour.

Touring the most important suburbs and attractions.

Starting from Kokarali, Karantina (Endopi) and Karatasi, we arrive at Konak Square, where we will see the Clock - the symbol of the city and the Government House with the Ionic elements on its facade, where the archbishop Chrysostomos was martyred.

Then, we will pass in front of the train station Kasaba (19th c.), The classical Greek style building of the Central Girls' school which once was called Chatzifragkou Street in the area of the hospitals.

We continue on to the British railway station of Aidiniou and Pounta, with the few levantine houses that survive the time. Will also see Frangomachalas, the most important and largest of all the Frankish districts of the East, inhabited by wealthy Europeans and Greeks.

In the narrow streets still stand today houses from the 19th century with the distinguishing classic architecture style, giving us a glimpse on how the town looked before its destruction.

As we cross the beach of the new "Kai", we will see the Kapetanakis House, an impressive neoclassical building that houses again after 15 years the Greek Consulate, while continuing to Bella Vista, we will pass in front of the classical building of National Bank and the old customs office (Eiffel’s project).

Then visit the ancient market of Smyrna and explore the archaeological site, where the richest collection of Greek frescoes in the world was discovered with scenes from the daily life of the Roman period.

Our next stop is Agios Voukolos, the only orthodox church that was saved by the 1922 destruction, dedicated to the first bishop of Smyrna Voukolos.

The temple has recently been restored and testifies with its presence the beautiful but also the tragic moments of Smyrna's Hellenism.

Then we will settle in a 4 * hotel in the city center.

The afternoon is free and you can visit the bustling bazaar of Izmir, the Kemeralti, where the old Ottoman neighborhood of the city is located, with its labyrinthine alleys, old Ottoman style houses and a restored 18th century mansion.

It is also worthwhile to wander through the picturesque alleys of Alsancak and sip your coffee or drink at one of the many cafes and restaurants located on the beach of Smyrna (a beautiful promenade stretching from Alsancak to the old customs office that has now been transformed in a modern shopping center - Konak Pier).

Return for dinner at the hotel and overnight stay.

After breakfast in the hotel, we depart for Ephesus, which for more than 1,000 years, was one of the biggest ancient cities of the ancient world and one of the seven churches of the Apocalypse.

It is the most well-preserved and most visited archaeological site in Turkey. Tour of the ancient city, that was founded during the 10th century BC as an Ionian colony.

But the main monuments that survive here today, refer to the Hellenistic, the Roman and the early Christian period.

Among them stands out the Parliament House, the Temple of Hadrian, the Temple of Diomitianou the Curetes Street, the Library of Celsus, the baths, the markets and the Theater, one of the biggest of the ancient world (24,000 spectators).

Then, passing with the bus from where the ruins of the Temple of Artemis are, one of the Seven Wonders of the World, we arrive at Seltsouk (Old Ephesus ).

Here we will visit the Basilica of Agios Ioannis Theologos.

According to tradition, Agios Ioannis retired to the castle top and lived there, where he wrote the Gospel of John.

This hill was an early important sacred place of pilgrimage, as is the place of death and burial of the loved Christ’s Apostle.

Initially, there was built a church by Constantine the Great, which Justinian replaced it in the 6th century with a majestic basilica, ruins of which are still preserved today.

Then, we depart for the cosmopolitan Kusadasi.

There will be free time and in the afternoon we depart for the Tsesme port, where we will arrive there after about 2 hrs of driving. We embark on the ferry and depart for Chios at 19:00 .

***For the excursion to Turkey, is necessary to have a passport or the new type Greek ID card